Since 1961, Hasegawa has been a leading manufacturer of plastic scale models. The company is based in Shizuoka, Japan, which is also home to another comparable model company called Tamiya. Both  Tamiya and Hasegawa offer similar products, so naturally there is a bit of a rivalry between the two companies.

The main difference between Tamiya and Hasegawa is that Hasegawa model kits tend to be more difficult to assemble, making them ideal for experienced builders or hobbyists who enjoy challenging themselves. Both companies offer excellent products, and there’s certainly nothing wrong with having both in your collection.

In this article, we’re going to focus on Hasegawa model airplanes. These kits are known for their meticulous attention to detail, and they’re so accurate that they’re often used in museum displays. Let’s take an in-depth look at five our absolute favorites, in no particular order.

The  Blue Impulse Kawasaki T-4 1/72 scale kit is incredibly detailed and built to last. These aircrafts have a fascinating history that these Hasegawa model airplanes honor beautifully.

Blue Impulse is the elite aerobatic demonstration team of the JASDF, or Japan Air Self-Defense Force.The team started in 1960, using six F-86 Sabres. In 1980, they switched to Mitsubishi T-2 planes, and then in 1995 they started using the Kawasaki T-4 that’s still in action today. The team regularly flies out of the Matsushima Air Base for air shows.

The T-4 is a high-performance subsonic intermediate jet trainer aircraft that fits two pilots in tandem. These agile, aerodynamic aircrafts are known for their ability to perform combat maneuvers at high speeds.

This limited edition 67-piece kit includes two T-4 planes with decals for JASDF 4th Air Wing, 11th Squadron Blue Impulse Team, Matsushima Air Base, 2017. Like all Hasegawa model airplanes, you can expect this kit to meet the high standards of discerning builders. If you’re into aerobatics, this kit is a must-own. 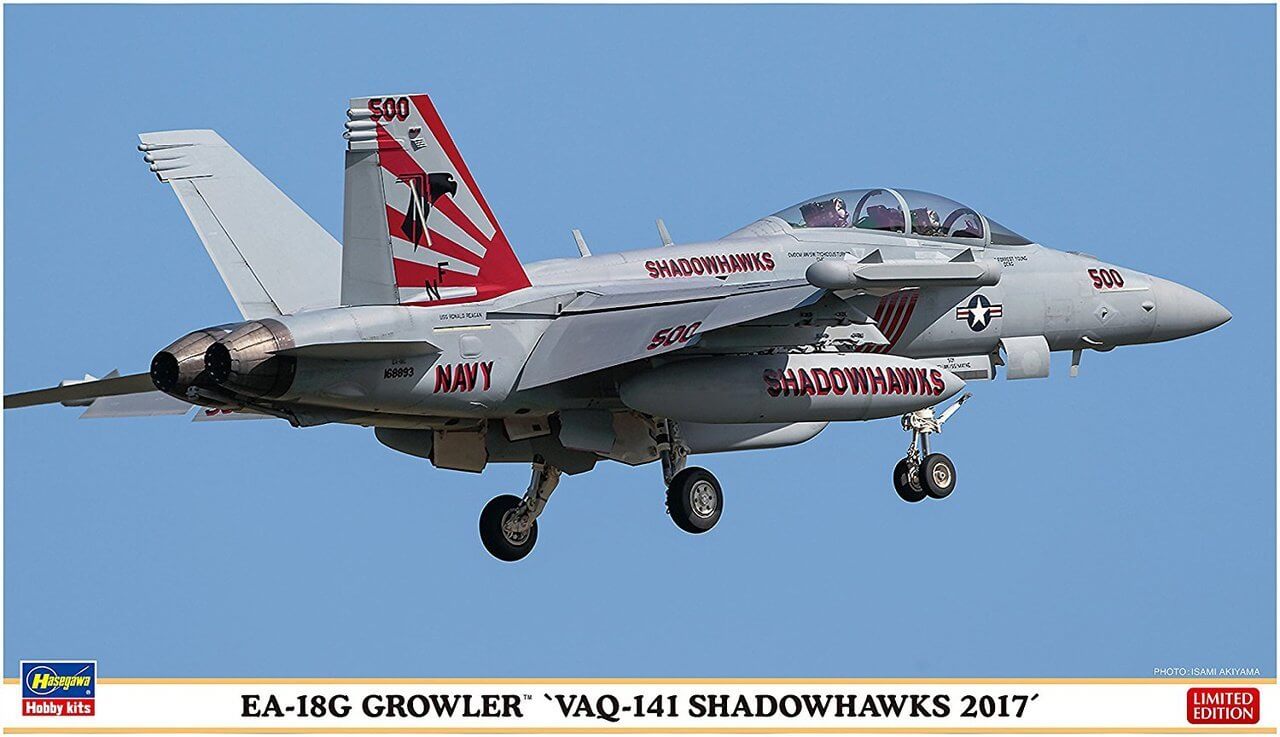 The Electronic Attack Squadron 141 (VAQ-141), or “Shadowhawks” as they’re known, fly Boeing EA-18G Growler aircrafts. These Growlers are American-made, and they’re used to jam enemy electronics. These fascinating aircrafts were first utilized in Operations New Dawn and Enduring Freedom, and today the unit is forward based in Atsugi, Japan.

This stunning  Boeing EA-18G Growler 1/72 scale kit is sure to elevate any collection. It’s a skill level 3 kit with 177 pieces, so some prior experience with Hasegawa model airplanes or other complex kits is highly recommended. This model would make a fantastic long-term project for someone who really loves to sink their teeth into a build.

While it’s technically not an airplane, we just had to include this awesome  Sea King Har. Mk.3 "Falklands" 1/48 Scale Kit. Sea Kings were mainly used by the British Royal Navy and Royal Air Force for anti-submarine warfare missions, and they were also used during the Falkland War to run supplies and soldiers to the Falkland Islands.

Following the war, Sea Kings were frequently used as search and rescue aircrafts, and the distinctive sound of the rotors is often called “the sound of safety.”

This fantastic scale kit pays homage to these powerful helicopters, providing exceptional attention to detail. It’s a skill level 3 kit with 195 pieces, so it’s perfect for builders who are looking for a challenge. The kit includes two decal options: 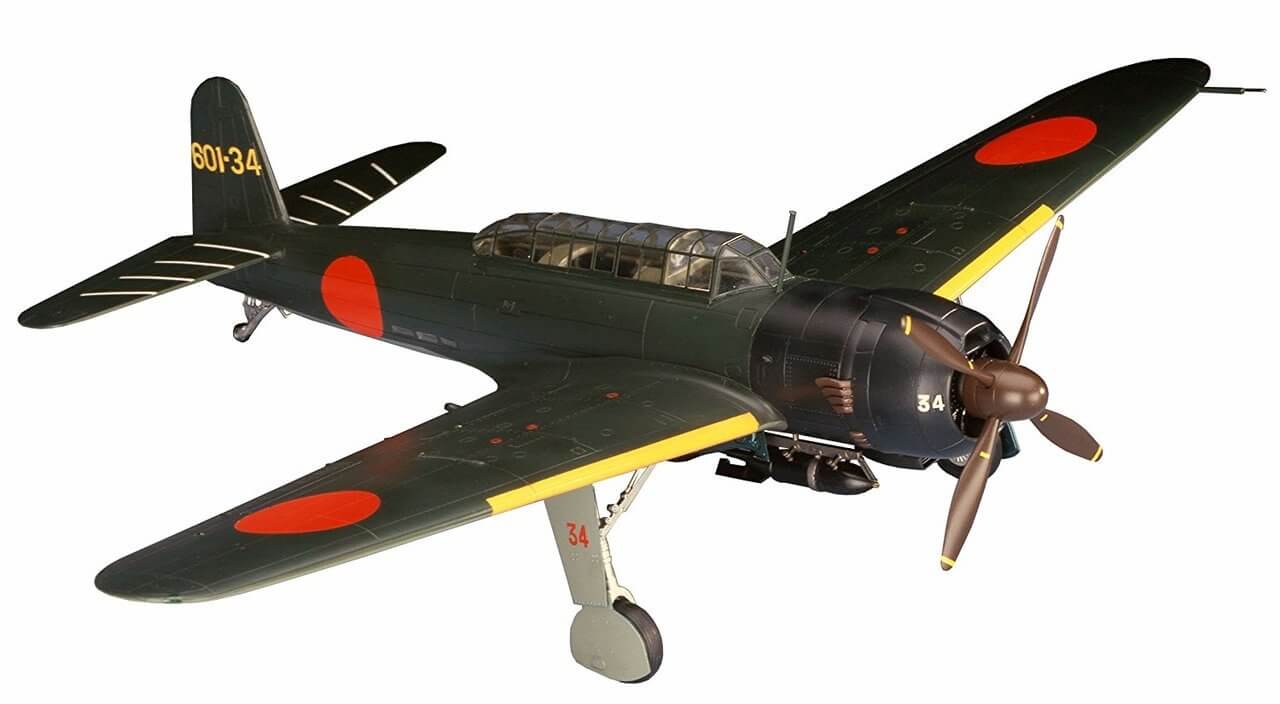 These Hasegawa model airplanes are a must-buy for WWII buffs. During the end of World War II, the Nakajima B6N2 (中島 B6N 天山—"Heavenly Mountain") was the Imperial Japanese Navy’s standard carrier-based attack plane. It featured a top speed of 250 knots, a range of 1800 nm, and a 1500 hp engine.

These impressively large planes were packed with features, but the original Mamori engine wasn’t reliable enough. Eventually, the engine was replaced with a less powerful Kasei engine that solved the reliability problems. By the end of 1943, the Nakajima B6N2 was no longer utilized in service.

This is a top-quality skill level 3 kit with 160 pieces. It includes two decal options: 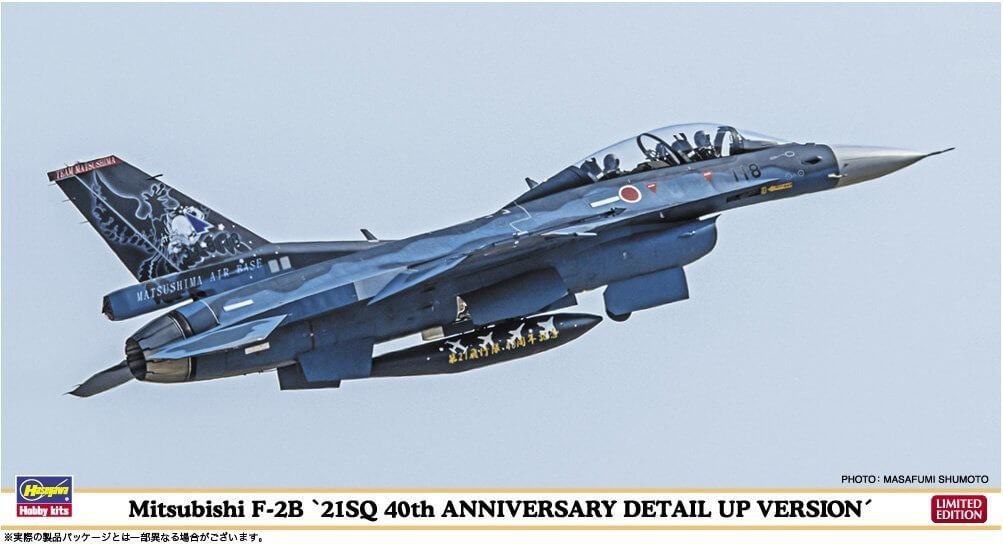 The Mitsubishi F-2 was manufactured by Japan and America for the Japan Air Self-Defense Force. It improved upon the classic F-16A, offering a larger wing area, a reduced weight and radar signature, a longer and wider nose, a larger tailplane, a larger air intake, and more. The F-2B is a two-seat training version of the F-2.

We’re proud to offer a huge selection of Japanese scale model kits, including a wide variety of Hasegawa products. These are some of our favorites, but make sure you browse our inventory to find the kit that grabs you. If you have any questions or comments, please feel free to email  [email protected], or get in touch with us through our online contact form now.

Every model collection deserves a few museum-quality Hasegawa model airplanes. Get the best deal on authentic Japanese products when you shop online at Plaza Japan.